between Hermeticism and Duende, in Search of Utopian/Real Spiritual Places

"From the wide anxiety of dawn

[…] Just passed, was the time of detachment.

And yet, I am already desert.

Lost in this melancholy curve.

Even if the night dispels the distance.

"Everything has extended, has eased, has been confused.

It is the time of summer that scrutinises."

darkness of the blood… ".

"At the foot, tight to the ascent,

From the grid of the branches

"It was an urban night,

rose and sulphurous was the dim light,

where, as from a movement of the shadow,

the shape seemed to rise."

"And the trees and the night

do not move anymore, except from nests"

In art criticism, nothing is more misleading than generalizations, which often lead to the assumption of an arbitrary and deceptive postulation. Therefore, each artist must be viewed and analysed in terms of their own idiosyncrasies, beyond preconceived patterns and references to categories and currents. Defining painters simply as figurative or abstract, for example, does not make any sense if then, within this outline, the various formal and conceptual differences formed upstream of such schematization are not highlighted. If this is true for the variety of artists, then it is certainly also true across the output of an individual painter, as we are able to define the characteristics of their specific cycles in relation to their artwork as a whole.

Thus, in the work Hagit Kazinitz, the painter, or perhaps more accurately, the multidisciplinary artist, a graduate of the Faculty of Arts – Hamidrasha at the prestigious Beit-Berl Art College, who lives and works in Tel-Aviv, Israel, and whose work boasts a string of national and foreign exhibitions, we can identify two necessary levels of interpretation, which while distinct, are at the same time complementary and inseparable one from the other.

The first level is what may be defined as the aesthetic-formal: that is to say, the artistic current within which her work falls and her various paintings’ compositional and chromatic implications. The second, on the other hand, is the conceptual-symbolic-psychological level: that is, the component which does not merely relate to the aesthetics and the 'epidermal ' and 'sensational' impression that her work produces in the observer, but that which determines in the audience the ability to reflect on a given theme through symbols and allegories. But unlike when reading an intellectual treatise on philosophy or psychoanalysis or latently 'political' piece, the latter operates through irrationally poetic and enlightening motifs. If only the first level existed, that would imply an exclusively virtuous painter from a technical point of view, while if we had only the second, and work that was entirely intellectual and devoid of captivating charm, we would be faced with a social ‘manifesto’ or a philosophical treatise, but not to a work of art.

In Hagit Kazinitz the two levels coexist, blend and merge into a unicum which is true art, pure poetics, and where her works, perhaps not unlike the hands of a blind man, uncover walls catching glimpses of heavens. Hagit projects her informal language, which is lyrical, and largely evocative of the French, German and Italian European informal language, towards Spatialism-inspired horizons, saturated with brightness.

The exhibition in Lisbon, Portugal

More from the exhibition in Lisbon 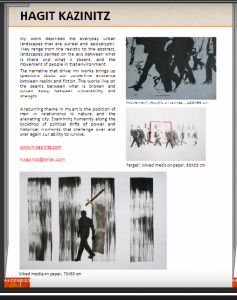 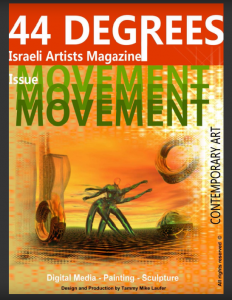 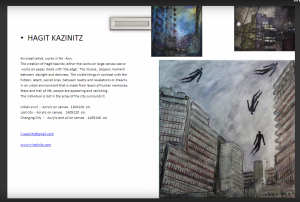 The concept of a “field”, In agriculture, refers to a plot of land cultivated by a human being for raising crops; in sociology, the term refers to spheres of interest, a space for stances, placements and possibilities, whose meaning is obtained through the power relations between the members of a particular group. Hagit Kazinitz’s combination of the two “fields” through her exhibition titled “Fields of Air” hints both at fields of interest and locations, although they are virtual plots “on the air” and anchored in a geographical “no place”. The displacement, the removal from context (in direct opposition to permanent placement in a given space) is a vital concept in Kazinitz’s oeuvre, since it engages in the deconstruction of meanings and their re-location, or “re-placement.”

The displacement operates on a continuum of signifiers in a relationship in which they are replacements: each sign is represented by another as a chain of infinite elements in proximity to one another. Thus, for example, the artist uses written texts on which she adds layers of meaning which simultaneously conceal and reveal .The covering camouflages and erases the initial identity to create something new, but leaves traces of things that have disappeared or were made to disappear. The act of blurring is a metaphorical denial of what was once there and its previous definitions to create something other, something new, out of them.

Lacan has argued that the process of displacement is always a metonymic reflection of desire. Desire is always greater than satisfaction: desire is always for something else, another place, a different experience, other fields that do not exist anywhere except in the art world universe. This desire can be fulfilled only in the virtual field, the field of air – in the work of art, a placeless place. The viewer “dives” into the painting and “arrives at” the object of desire, each to one’s own place and personal memories, which are also shared to a certain extent.

Natural and urban landscapes appear deliberately as unreal replacements for what is experienced as real. The landscape is an additional paradigm of displacement since its mode of display takes it out of context, deconstructs and places it in a different context. The distancing from the mimetic is achieved through numerous layers and the wide use of monochrome. Deconstruction and new placement of signs can be found in Kazinitz’s works also by virtue of her extensive use of print letters as a replacement and additional processing of the experience. Integrating written texts in modern art is not new, after all one century ago Picasso and Braque added letters to their paintings and collages, as did the Futurists, Surrealists and later Pop artists. The use of print letters can reflect alienation as opposed to the personal and authentic aspects of handwritten letters.

Thus, for example, the work Sea is a verbal text, referring to the poetics the words seem to have in common and the space formed by the possibilities inherent in the various literary techniques embodied in the words. The written word can limit its meaning to a single expression. For example, the combination of the same sound (“see”) with its literal “interpretations” all in a single artwork, expands the canvas to present new fields of meaning. In this way, the artwork becomes a field of air, a virtual field comprising numerous worlds and statements forming a new thought and creating a new field. Viewers become active participants, since the lack of plasticity enables them to soar on the wings of imagination to their private associations stimulated by the cluster of words.

Kazinitz uses words in different ways: sometimes they are encoded in the work invisibly, at other times with meaning and sometimes taken out of context and are indecipherable. Kazinitz accomplishes a process opposite to the transformations of verbal expressions into visual imagery by other artists (e.g., Chagall or Sgan-Cohen): she uses words with a common sound. Her narrative is formed around the common sound, demonstrating how each word collaborates in the creation of a new field of meaning. In this context, the word “sea” also refers to the lack of place/locale, land, sea as representing the opposite of dry land. The displacement is in contrast to permanency in a given space, and this image fits the space in which the artwork is located – “no place,” nowhere, not someplace.

The installation in which the words hover above a “thicket” of shredded paper and painted black is another example of the transformation of the abstract sign – the written word – into something lacking place and plasticity, without being anchored in stability. The words are literally hanging in the air.   Integrating the floating letters with a thick mass of paper, simple recycled material placed on the ground, is the visual reflection of the integration of the sacred and the mundane, high and low, literally and figuratively. In the video art Earth – Wind, the words appear one after the other, appear and disappear.  The soundtrack conveys a sense of instability, of a shuddering vibration hinting at an approaching earthquake. The images are also a type of pictographic language which cannot always be deciphered.